Many adults are unaware of how pervasive pornography has become, the nature of the material young people see, or how it is affecting young people’s sexual understandings and experiences.

In order to assist young people to navigate this new reality, parents, schools and community organisations must first understand the issues.

With the click of a button, it is now possible to access a vast array of free pornographic images via the internet. 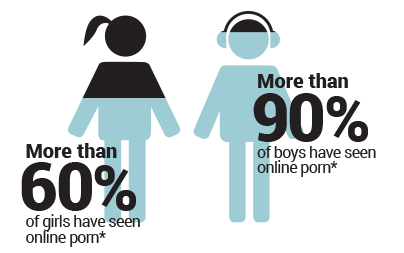 The mainstreaming of pornography is reinforced by its influence on popular culture; in music videos, films, television programs, advertising and fashion.

The shift of pornography from a centrefold in a magazine to moving images on a screen has been accompanied by a change in the nature of the material. Pornography is not just images of people having sex. It communicates a whole range of complex messages – including messages about men, women, sex and power.

The aggression in mainstream pornography is overwhelmingly directed towards women.

And viewers see more than sex, aggression and degradation. They also see the performers’ responses to these acts.

The message to viewers is that girls and women like it when men hit, choke or gag them.

These representations are giving a distorted view of sex and of men and women, including a sort of eroticisation of violence against women.

Just as we can acquire a taste for a particular food or drink – even one that we initially don’t like – we also can develop sexual tastes.

Free and full consent is crucial.

Sex is not a performance.

In real life, sex is not a spectator sport – and it shouldn’t be something you just do for your partner. If you feel like you need to fake it or do things you’re not into, there’s something wrong. Sex should feel good – emotionally and physically – for everyone involved.

Violence and humiliation are not sexy.

Life for a performer can be pretty rough.

Performers regularly catch sexually transmitted infections, find it hard to maintain relationships, can find themselves under pressure to do things they don’t want to do and can end up with serious and lasting damage to their bodies or emotional wellbeing.

Sex can have meaning.

Sex can be fantastic, but it can also be awful – and everything in between.

The keys to good sex are communication, consent and respect.